Universal Studios Hollywood is the ultimate Los Angeles tourist destination, combining thrilling theme park rides and shows with a real working movie studio. Find out what you need to know about park attractions, tours, dining, and tickets to help you plan your visit.

When this Hollywood attraction first opened in 1964, it was little more than a modest tram tour offering the occasional glimpse of a movie star. Today, Universal Studios Hollywood is more than a theme park; it’s an entertainment experience.

Park guests have the opportunity to get up close and personal with popular television shows and movies in ways no other theme park getaway can manage. It’s no wonder that this mega-theme park is dubbed “The Entertainment Capital of L.A.” and that a review on ThemeParkInsider.com suggests that it just might be the most unusual theme park in the United States.

Included with all park admission tickets, the Studio Tour is one of Universal Hollywood’s most popular attractions. Guests are able to visit sets from blockbuster movies, including the legendary Bates Motel from Psycho, the chilling plane crash from War of the Worlds, and the explosive stunts from The Fast and the Furious.

One of the newest and biggest thrills on the tour is King Kong 360 3-D, billed as the world’s largest 3-D experience. This award-winning attraction puts guests in the middle of a terrifying struggle between a 35-foot T-Rex and the world’s most famous giant gorilla.

Hit television shows are also featured on the tour, including a glimpse of the Wisteria Lane set from Desperate Housewives. Because of the evolving nature of the movie industry and current production schedules, the exact sets included on the tour will vary, making the park well worth repeat visits.

A theme park isn’t complete without thrill rides, and Universal Hollywood features enough heart-pounding excitement for even the most adventurous guests. Some of the best include:

The Wizarding World of Harry Potter 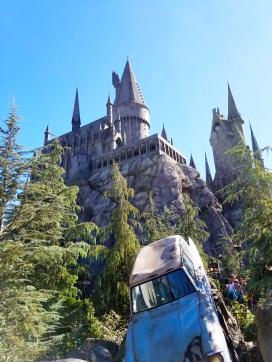 The newest area of Universal Studios Hollywood is The Wizarding World of Harry Potter, complete with attractions and well-known establishments.

There are also plenty of tamer rides the whole family can enjoy.

In addition to rides, guests at Universal Hollywood can see movie magic up close — and sometimes even become part of the action. 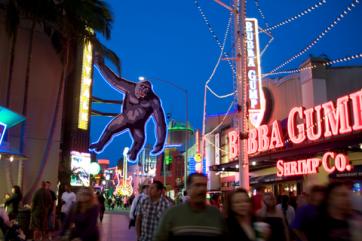 When it’s time to relax and grab a bite to eat, guests can head over to Universal CityWalk, a three-block entertainment, dining and shopping promenade that is adjacent to the theme park. CityWalk features more than 30 eateries, six nightclubs, a 19-screen theater, and an amphitheater for concerts and live events.

If you’re local to Southern California, you may be interested in annual passes. The California Neighbor Pass that includes over 175 days of access is $129. The Gold Annual pass is $289, which includes parking, and the Platinum Annual Pass, which includes front of the line access, is $589.

Get the Latest Park Information

Everything about the park is always subject to change. For more information about Universal Hollywood park hours, special events, public transportation, and more, visit the Universal Studios Hollywood website or call 1-800-UNIVERSAL to speak with park specialists. Enjoy your visit!

Discount Travel to the Lagoon Amusement Park in Utah