Cruising through miles of winding river offers a relaxing way to explore the Mississippi delta and the surrounding area. In fact, a Mississippi River cruise can become the trip of a lifetime once you’ve sorted out your travel options.

Cruise Lines on the Mississippi

Depending on the port stops, a cruise along the Mississippi River typically lasts about three to 10 days. This majestic waterway encompasses more than 50 rivers and tributaries, including the Ohio, Tennessee, and Missouri rivers. As of 2014, only two established cruise lines offer regular trips along the Mississippi.

Sign up for the newsletter to keep up to date on special voyages and fares. Promotions are available for early booking, and fall and winter rates are offered at two-for-one prices on select sailings.

Queen of the Mississippi

American Cruise Lines is a large, river cruise company which offers trips on the Queen of the Mississippi. This modern paddlewheel is full of brass details and hardwood railings and is truly modeled after Victorian era riverboats of the late 1800s. Since the passenger capacity is only 150, the staterooms are much larger than other riverboats.

Avalon Waterways is a part of Globus, a large international tour company. They reserve 20 outside staterooms for special voyages and offer a 12 day trip aboard the American Queen.

Since this is a charter trip, very few reviews are available, but Avalon Waterways has won numerous awards, and the company offers a one-of-a-kind itinerary for tourists to this area. This is a perfect trip for people visiting from other regions. 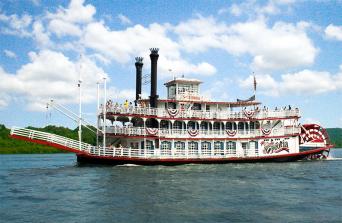 The Spirit of Peoria is a modern boat commissioned and built in 1988. It was constructed to mirror the look of a vintage paddle boat, but it operates on a modern propulsion system. It has four decks, is about 160 feet long, and chugs along at an average speed of seven to ten miles per hour. The boat is also available for private charters and weddings with special rates in the winter.

In addition to day cruises, the boat offers a variety of overnight cruises. These trips include transportation, meals and lodging. Choosing between two, three, or five day trips depends largely on the departure point.

The shorter trips to Starve Rock State Park are a fun way for outdoors types to relax. TripAdvisor reviews are excellent. Some hint at the trip being very low key and great for grandparents with small children. One reviewer suggests finding seating on the Port side of the boat, since the west bank of the river is where most of the activity takes place.

There are three general regions for cruises on the Mississippi River, each with its own attractions and historical charm. Precise ports of call may vary depending on the river’s conditions, the season, and commercial shipping conditions.

The Mississippi Has a Lot to Offer

Regardless of the cruise line, each Mississippi River cruise offers a window into the local history and culture, including devoted regional menus, jazz, country and bluegrass music, historical reenactments, and other delightful cultural experiences. In addition, the beautiful state parks and miles of calm river appeal to the naturalist in all of us. All things considered, this old river still has a lot to offer anyone seeking a bit of adventure.