Alien Apex Resort and theme park is currently under development in Roswell, New Mexico, a popular site for alien-related enthusiasm.

Roswell is a small town in the southeastern part of New Mexico. The resident population is only 45,000, but the town regularly attracts thousands of tourists interested in visiting the site of the famous – and infamous – Roswell Incident. That supposedly alien encounter has spawned a cult following of eager enthusiasts, and Roswell offers unique extra terrestrial theming for guests to enjoy, from alien and space themes at local restaurants and stores, to boutiques dedicated to the presence of UFOs and aliens. Currently, the town’s most popular attraction is the International UFO Museum and Research Center that opened in 1992 and has attracted more than one million visitors. Alien Apex Resort and theme park hopes to build on that frenzy of excitement about the unknown by offering related attractions and thrill rides that celebrate the July night that started it all.

What became known as the Roswell Incident happened in July 1947 when what the military claims to be a top secret experimental weather balloon crashed near the town. Military officials based in Roswell handled the remains of the equipment, but because of the quick cover up (perfectly understandable for top secret equipment), a host of alien-related theories were spawned. The incident quickly became a pop culture phenomenon that swept through a country ready to believe, and more than sixty years later the name Roswell is still associated with activity from outer space.

Because theme parks and thrill rides are a popular attraction for tourists and adrenaline junkies, the Alien Apex resort plans hope to capture the interest of the regular stream of tourists who visit Roswell, as well as any traveler interested in an out-of-this-world destination. The park is currently in the initial planning stages and few details have been released – suspense, after all, is a key ingredient in alien encounters. It is thought that the park will be between 60 and 80 acres in size when it first opens, with land available to expand up to 150 acres as the park grows. In addition to family rides, themed restaurants, and other small amusement park attractions, key features of the park will include:

By the time the park opens – tentatively stated as no sooner than 2010 – who knows what other fantastical rides and attractions it may offer, but alien and coaster enthusiasts alike can be assured that it will be an experience unlike any other. 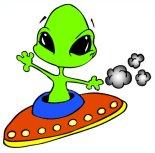 Everyone is welcome at the Alien Apex Resort!

The public has long been fascinated with the concept of life from outer space and alien visitors, and it is that fascination that Alien Apex Resort hopes to capitalize on. Dozens of popular movies, from horror films to comedy flicks to family features, have incorporated aliens, space ships, and otherworldly adventures, including Star Trek, Independence Day, The X-Files, Star Wars, Men In Black, Alien, Close Encounters of the Third Kind, Lilo and Stitch, Starship Troopers, and E.T.: The Extra Terrestrial. These and other films have kept the alien craze alive and well, and many theme parks have incorporated space-based attractions into their lineup, including:

These are only a few of the space-themed rides available at many amusement parks, from simple rocket-shaped circular rides to highly detailed space battle roller coasters that all show the public’s ongoing fascination with outer space.

The Alien Apex Resort and theme park planned for Roswell, New Mexico hopes to be the premier destination for alien enthusiasts from around the world. Given that one small incident launched this town to international fame, there is no telling how far beyond an alien-themed amusement park may take it.

How to Get Universal Studios Hollywood Coupons

Which Countries Have Disney Theme Parks?

Pirates of the Caribbean Disneyland